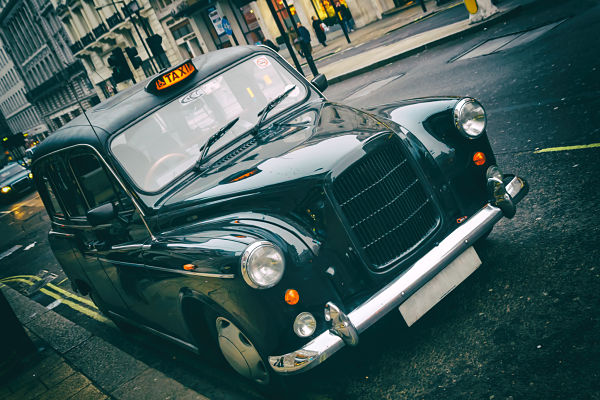 The public transport system in London is exceptional, with the London Underground providing a reliable and quick way to traverse the many boroughs of London and see the sights. Our recent blog article explains more about using London’s public transport.

But there might be times when you need a taxi, or a private hire care service. We’ll provide some useful information below about using taxis and private hire car services in London.

Best for short trips around the city:  London Taxis

Black cabs started out as horse-drawn carriages called ‘hackney carriages’ and the earliest record of these date back more than 350 years to 1662. Today, there are more than 20,000 black cabs in London!

Cab drivers in London (often known as ‘cabbies’) have to pass a very difficult test called ‘The Knowledge’ before they can drive a black cab. Drivers need to memorise every street in London within six miles from the Charing Cross train station. As a result, they learn 320 routes, 25,000 streets and 20,000 landmarks. The average time to study and pass the exam is 3 years. Keep an eye out in London for motorcycle riders driving around with what looks like a clipboard attached to the front of their motorcycle – that’s actually maps of the various streets and landmarks they’re studying while navigating on their bike. And you think your time at college was hard! Try doing it whilst navigating the traffic on a motorcycle.

Black cabs can be booked in advance by phone or app, picked up from designated taxi ranks or hailed on the street. Look for a cab with a light on top displaying the word ‘TAXI’ (this means they are available for hire). When they are hired, this light is switched off. Whatever you do, don’t shout “TAXI!” because apparently that’s illegal and they won’t stop for you! When the driver stops, go to the front passenger window (remember the driver sits on the right hand side) and explain to her or him where you want to go. Once they agree, get inside and you’re on your way. Unlike in the USA, cab drivers like to chat, so feel free to strike up a conversation, or ask them for tips about good pubs or restaurants.

Once you arrive at your destination, the final fare will be displayed on the meter. You can pay in cash or with a credit card. The Transport for London website provides useful information about how cab fares are calculated.

Best for longer trips such as to/from the airport: Mini Cabs

Mini Cabs are a cheaper alternative to black cabs, which can be quite expensive. They’re also regulated by the government and drivers must be licensed.

Because they can’t be hailed on the street and need to be booked in advance, mini cabs are a better choice for longer distance travel, for example to and from the airport.

Uber is fully operational in London and provides the most cost effective private hire car service. If you’ve used Uber before you know how easy it is to open the app, select your destination and watch your Uber arrive on the interactive map.

A word of caution though is that you’ll want to update your Uber profile with a local UK mobile number – Uber drivers won’t be able to call or text your USA cell number when trying to locate you. You can buy a local UK prepaid SIM card (complete with a local UK cell number) from My UK SIM Card and have it shipped to you in the USA before you leave on your vacation. The SIM Card comes complete with 12GB of high speed 4G LTE data, minutes and texts, and if you’re also travelling to Europe, it works in 34 European countries including France, Italy, Germany and Spain.